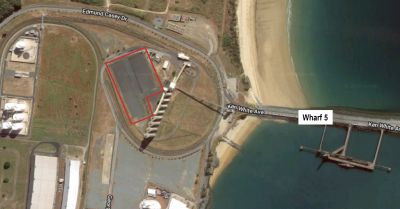 NQBP Trade Development Manager Darren Fursman said Mackay is one of the major servicing centres for the Central Queensland mining and agricultural industries.

“As a business, we identified the potential for an area within the port to cater for a common user facility that can accommodate a variety of bulk trades,” Mr Fursman said.

“The new common-user handling area provides regional businesses that need to import or exports bulk materials the opportunity to get their product to market earlier, grow trade and, potentially, lead to the development of their own storage and handling facilities.”

The new storage area would be suitable for trades such as minerals, timber, construction materials, scrap metal, sugar and grains and other bulk commodities.

The common user bulk material handling area is located behind the grain terminal in the northern part of the port near Wharf 5.

To discuss this opportunity, contact NQBP’s Trade Development Manager Darren Fursman on 0498 881 788 or dfursman@nqbp.com.au or Commercial Manager Paul Coomer on 0437 447 710 or pcoomer@nqbp.com.au.