The new road will be designated with the indigenous language and known as Gudyara Road meaning "sea" in recognition of the region’s Yuwi Traditional Owners.

Construction is on track to be completed by early 2020, weather permitting. 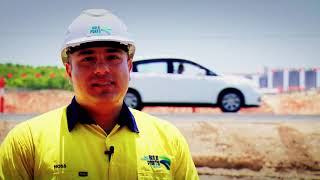 The project will bring the following benefits:

Residents will continue to experience changes to traffic flow on Spiller Avenue, Edmund Casey Drive and Slade Point Road as the project progresses.

The temporary traffic management measures are in place to ensure the safety of the public and construction crew. These include warning signage, realigned traffic lanes and reduced speed limits.

The project team are making every effort to keep disruptions to a minimum and drivers and road users are asked to slow down around the road works and follow all signs and directions given by traffic controllers.

The overall project is expected to cost approximately $2.9 million. Between five and 10 Mackay-based subcontractors are being used during the life of the project supporting up to 80 local jobs.

Contacts and feedback NQBP welcomes your feedback which can be made via the feedback form below via email to communications@nqbp.com.au or by phone 1300 129 255 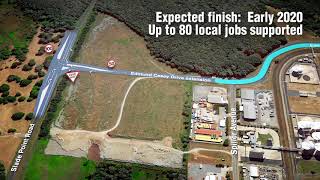 NQBP is extending Edmund Casey Drive on existing port property to link with Slade Point Road at the Port of Mackay.

The project will involve extending Edmund Casey Drive by 500 metres.

Assessments were undertaken during planning and design stages to ascertain any potential impacts on the surrounding environment, including the adjacent wetland. The assessments concluded that no significant environmental impacts were likely and that any impacts could be managed through standard environmental controls.

Environmental monitoring and management measures will be implemented throughout the program to minimise the risk of any potential impacts on the environment. Noise and dust mitigation practices in place.

The existing conversation/buffer area between the Port and residents will be maintained.

Works will take place between 6.30am and 6.30pm Monday to Saturday. There will be no work on Sundays or public holidays.

During construction, traffic management will be in place which may include realigned traffic lanes and reduced speed limits, ensuring the safety of the public and construction crew while work is underway.

After completion, the speed limit along Slade Point Road will return to its previously zoned speed under the management of the Department of Transport and Main Roads.

It is not anticipated that the extension of Edmund Casey Drive will significantly increase the number of truck movements in the immediate future. Traffic will slowly increase as development occurs within the Port.

Yes, there will be separate lanes into Edmund Casey Drive from Slade Point Road (and vice-versa).

The new road once completed, will not impact cyclist traffic on Slade Point Road.

While traffic management will be in place during the project, full road closures are not anticipated.

At this stage, we are not anticipating any construction works outside of the hours listed above, however traffic management will remain in place overnight.