After more than 40 years of working at the Port of Mackay, Debbie McDonald hopes that her actions have helped inspire the next generation of women in Ports.

This International Women’s Day (Tuesday 8 March) the North Queensland Bulk Ports (NQBP) Financial Reporting Officer shares her story of what is it like to work in a traditionally male-dominated industry.

One of Debbie’s proudest moments has been helping women get into historically male jobs at the Port of Mackay.

“In the early 90s the shipping crew roster was only available to a small group of outside staff, all of whom were male,” she said.

“When our Enterprise Bargaining Agreement was being negotiated, we wanted to see equity across all staff conditions.

“As part of the negotiating team, I made it clear that if a staff member was trained and capable of performing the duties, gender should not come into it.

“Now we have a number of women working with shipping movements, and for some it has changed their lives.” 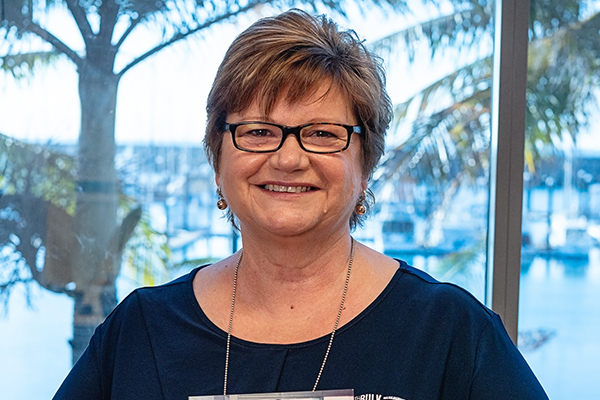 Since she was first interviewed for the job as a 19-year-old, Debbie says changes have been made to “Break the Bias” and create a world where difference is celebrated.

“I was engaged and felt I needed to explain that I would continue to work after my marriage. In those days it was expected a woman would finish work after marriage.

“Now it would be unwarranted to be asked your marital status in an interview.”

One of the biggest changes Debbie has seen over the years is the increase of women in management and professional roles.

“When I was working in a supervisor role, the finance management team were all men,” she said.

“Now we have a number of females in management roles across all areas in the port, which is great to see.

“We still have a long way to go to be on an equal basis, but I have faith in the younger generation to continue this trend.”

Despite being perceived as a male-dominated industry, Debbie’s advice to women looking to work in ports is simply go for it.

“While society has gone a long way in gender equity, I believe it is the unconscious bias that creates the largest barriers for women,” she said.

“My advice to women looking to enter the industry is to have confidence in your skills and knowledge and persist in going for the role you desire.

“Change only happens with persistence.”