The World Heritage Area is one of the best managed marine ecosystems in the world and the Reef 2050 Long Term Sustainability Plan (Reef 2050) sets out strategies to ensure this continues.

Through a series of actions, the plan brings together government, industry, Traditional Owners, researchers and the community and provides a shared pathway to the future.

Over the course of 18 months, and as part of Water Quality Action 17, NQBP has worked alongside Queensland Ports Association (QPA) on a study to:

“Understand the port sediment characteristics and risks at the major ports and how they interact and contribute to broader catchment contributions within the World Heritage Area.”

This knowledge helps us to understand sediment dynamics in the Great Barrier Reef region and to manage port operations in a sustainable way that does not adversely affect the reef. At the same time, it helps keep our ports open and trading effectively to support our economy, communities and way of life.

This work was scoped in 2017 with input from research agencies and has been reviewed by Environment Managers from each port authority, QPA and technical specialists engaged by QPA. In addition, it has also been the subject of independent peer review by Dr Andy Symonds from Port and Coastal Solutions. 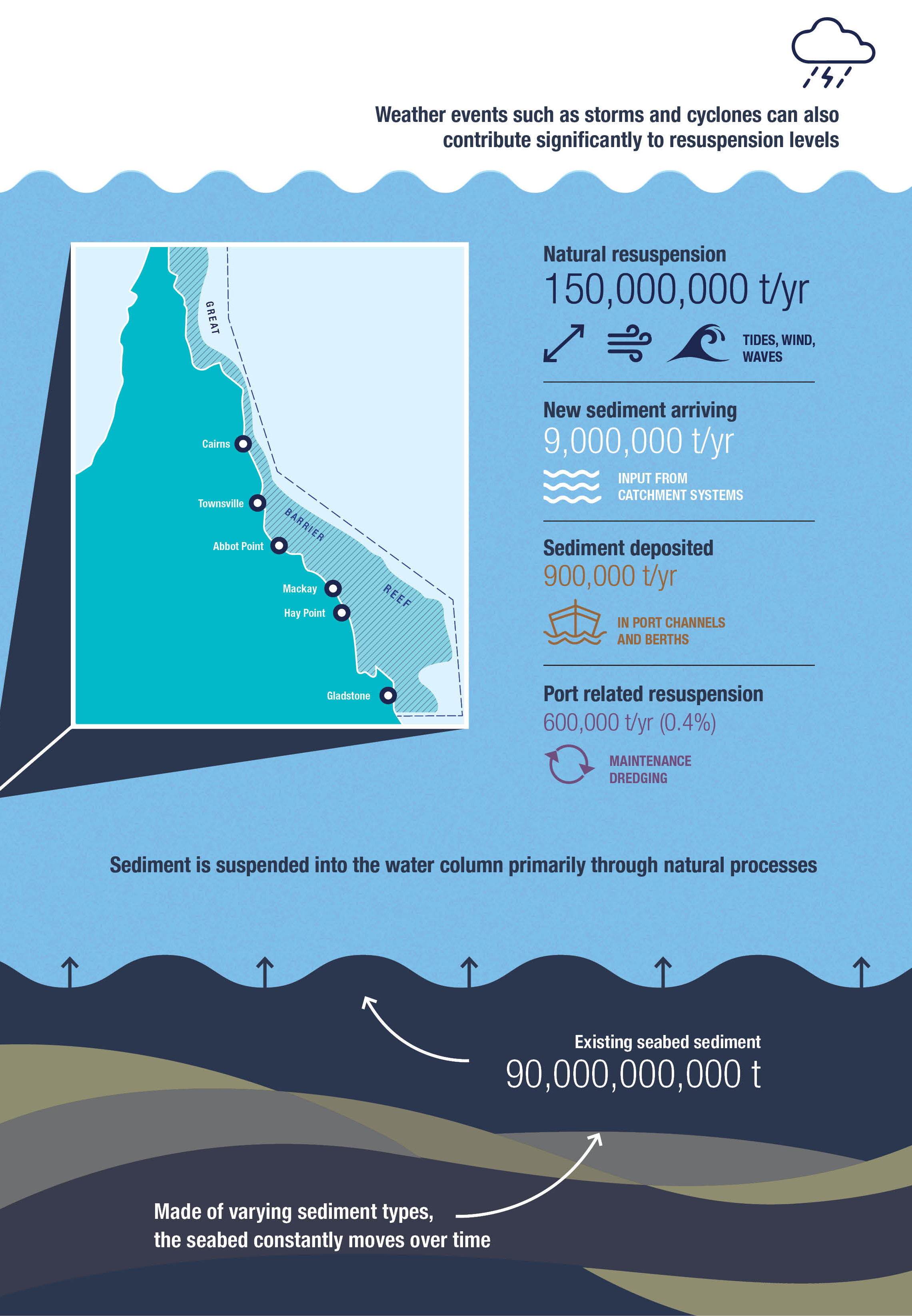 The evolution of the GBR has occurred over millions of years as a result of tectonic activity, sediment movements and coral reef growth. This has resulted in a series of islands, outer and inner reefs and a large, relatively protected inner lagoon (open water).The seabed area of the lagoon and inshore areas in particular are made up of varying sediment types including rock, gravel, sand, silts and clay.

Today, and continually over time, the seabed of the lagoon is moving and being suspended in the water column by winds and tides that drive waves and currents. At the same time large storm events, especially cyclones, move large amounts of sediment and the subsequent river runoff from flood rain brings further sediment into the system.

Sediment transport processes on the inner shelf of the lagoon are driven primarily by tidal and wind-driven wave resuspension.The south-east trade winds are dominant between March and October, these winds generate waves which resuspend coastal sediments and also result in a general movement to the north-west. Suspended sediments then become trapped in a turbid nearshore coastal layer that contains higher suspended sediment concentrations than adjacent offshore waters.

As shown in the figure above, there is 90 billion tonnes of sediment within the GBR system with 9 million tonnes entering from catchments every year. Of this around 150 million tonnes is suspended within the water column by waves and currents on an annual basis. Approximately 900,000 tonnes settles out in port shipping areas such as channels, berths and swing basins. Two thirds (~600,000 tonnes) of this may resuspend in the water column during dredging operations to settle out somewhere else – usually in close proximity to the port.