Major works are under way on the 150-year-old Bowen Wharf, with local business leading the charge as part of the Palaszczuk Government’s economic recovery plan.

Transport and Main Roads Minister Mark Bailey said over coming months, close to $2.7 million worth of works will be carried out on the Wharf, which will see some of the structure’s aged timber members repaired or replaced.

“One hundred per cent of the budget will be spent in North Queensland; with over half a million dollars to be injected into the Whitsunday region alone,” Mr Bailey said.

“The Whitsunday region is a huge reason why Queensland is the place to be.

“It’s why the Palaszczuk Government is engaging local business, continuing to invest in the wharves, has completed major Bruce Highway upgrades in the region, and will upgrade Proserpine Shute Harbour Road.” 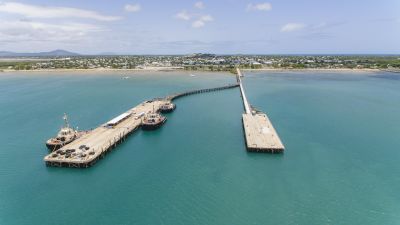 “We’ve worked with Wisely, the project’s principal contractor, and various Bowen stakeholder groups to maximise opportunities for local tradespersons and businesses to be involved in the works and we’re extremely pleased with the outcome.

Wisely Chief Executive Officer Chris Bugeja said the company has experienced a great response to its local procurement process for the project.

“We’ve engaged 15 skilled persons to assist in the delivery of the works, seven of whom are from the Whitsunday region,” Mr Bugeja said.

“Specifically, the team comprises five specialist tradespersons from Wisely’s Mackay team, five tradespersons and operators from Bowen, two from Airlie Beach, two from Townsville and one from Cairns.

Public access to the Wharf will remain available throughout the repair works provided it is safe and practical to do so. Should a temporary closure be required, NQBP will inform the public via additional signage and its social media channels.

The Wharf’s repair works are expected to take about six months to complete, weather permitting.