More regional jobs are on the way at the Port of Mackay with the Palaszczuk Government and North Queensland Bulk Ports announcing today that works will commence on a new $8.5 million tug berth facility.

Member for Mackay Julieanne Gilbert visited the Port today and said North Queensland-based Pacific Marine Group Pty Ltd would deliver the new facility, generating 20 jobs during the peak of the project, with at least half of the jobs expected to be local to Mackay.

Mrs Gilbert said the tug berth project was the latest, and the largest, in a series of significant investments totalling $17 million aimed at boosting the port for current and future trade, and creating jobs as part of Queensland’s economic recovery plan.

“The Port of Mackay continues to be a hive for activity, with multiple projects that will position the port to be able to take advantage of new, diversified trade opportunities such as rail, or renewables projects,” Mrs Gilbert said.

“Our latest $17 million injection for the port has already supported more than 100 jobs in the region so far.

“The facility will include berths for up to two tugs including a gangway and floating pontoon, which can also accommodate bigger and more powerful tugs.

“Growing our port and jobs profile in the region is part of the Palaszczuk Government’s $50 billion infrastructure guarantee in Queensland’s plan for economic recovery.” 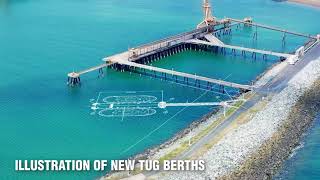 See a flyover illustration of the new Tug Berths

NQBP Chief Executive Officer Nicolas Fertin said having a dedicated tug berth facility inside the secure port area will cater for the existing tug fleet, with the ability to expand for future growth.

The Höegh Autoliners’ operated ‘Serenity Ace’ unloaded around 2,340 freight tonnes of mining equipment, imported to the Mackay region from both domestic and international locations. 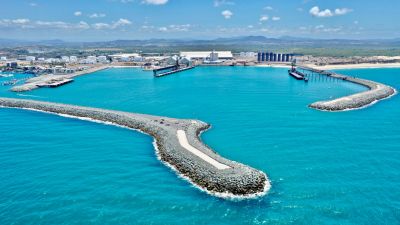 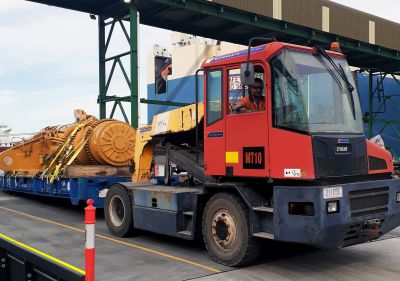 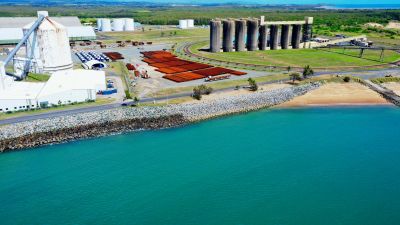 “The Wharf’s new access bridge, with a load capacity of more than 100 tonnes, gives the market further confidence in the port as a ‘central Queensland gateway’", Mr Fertin said.

“The completion of this project enhances NQBP’s RoRo trade capabilities, creating more opportunities for trade diversification by enabling heavier cargoes through the port.”

Principal contractor V2R Projects supported around 100 jobs in a boost for the region’s economy during the project.

For the stabilisation of the western revetment works inside the Port, NQBP engaged Queensland-based marine civil contractors MGN Civil on the $1.5M project, supporting up to 15 jobs.