The first roll-on roll-off (RORO) ship to berth at Port of Mackay arrived on Thursday, with four Caterpillar 794AC mining trucks on board. 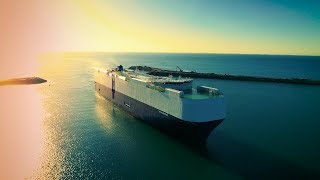 “Trade growth and diversification are an important focus for the Port of Mackay. Our new infrastructure upgrades allow RORO vessels to berth, which significantly expands our capabilities,” Mr Webb said.

“These vessels make it easier to ship additional heavy vehicles and machinery into the port. More than 100,000 tonnes of break bulk cargo passed through the Port of Mackay in 2017-18 and we aim to continue this strong trend in the year ahead.”

The Cat ®794AC trucks were shipped into Australia by Hastings Deering and began their journey in the United States, where they were loaded in both Jackonsville, Florida and Freeport, Texas. From there, they travelled via the Panama Canal and New Zealand, before arriving in north Queensland, bound for the Bowen Basin.

“Historically, this kind of machinery has had to be brought into Australia via other ports and transported large distances on the roads,” Mr Smith said.

“With mining activity picking up in the Bowen Basin, it’s great to have the option to bring equipment directly into the Port of Mackay.”

The trucks are being assembled at the Hasting Deering facility in nearby Paget, before being  delivered to National Mining Services—transported by National Heavy Haulage—both subsidiaries of the National Group.

National Group Chief Executive Officer and Managing Director Mark Ackroyd called the shipment a milestone for the region, and the mining and construction sector as a whole.

“I would like to thank North Queensland Bulk Ports for their efforts,” Mr Ackroyd said.

“The roll-on roll-off vessel is a game changer as it will create local opportunities and help put the Port of Mackay on the international map.”

Norwegian-based shipping company Hoegh Autoliners, who operate the RORO vessel Viking Destiny that delivered the cargo, agreed the ability to berth at the Port of Mackay could help them expand their shipping routes.

“We have been investing in our US to Australia service and Mackay has the potential to become a very useful stopping point along the east coast,” Sales Manager Oceania Brendan Wallis said.

“Working with NQBP has been a positive experience and we look forward to exploring new opportunities to work together.”