Port Services Workers Kelvin Power and James Miller have each celebrated 35 years of service at Bowen.

Their combined seven decades of service at the ports began in 1986.

A young James 'Jumbo' Miller and Kelvin 'Kel' Power had just started their three-month traineeship with Harbours and Marine. Thirty-five years on, the Bowen born-and-bred pair has stuck to their jobs as Port Service Workers.

From Harbours and Marine, Jumbo and Kel moved across to Ports Corporation of Queensland and then on to NQBP following the merger with Mackay Ports Limited in 2008. ​​​​​​​​​​​

We caught up with the pair to reflect on their special milestone. 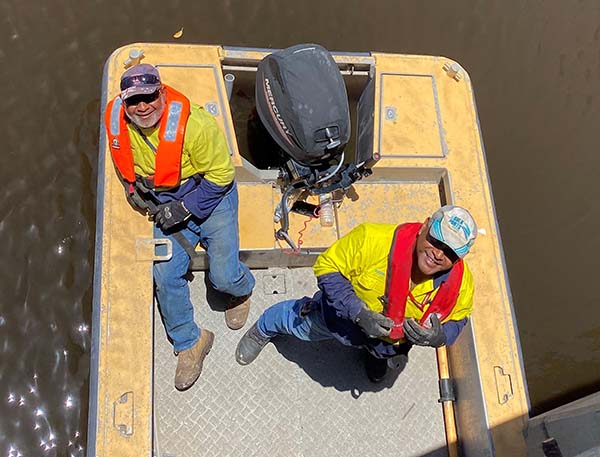 What advice would you give to the next generation?

[Jumbo] Work hard, be punctual, and listen to your elders.

[Kel] My advice to the next generation, would encourage them to think about what they would love to do with their life. Set goals and to work hard to fulfilling those goals for their lives.

In your role what could you be found doing day-to-day?

[Jumbo] At the moment, which I haven’t done for years, emptying rubbish bins and mowing grass. Most days we check the wharf and maintenance. Anything outdoors.

[Kel] In our day- to - day roles, we could be found doing work maintenance on Bowen wharves or doing under wharf inspection in a boat, or mussel trap at Abbot Point wharf. We also could be doing land care work on NQBP land at Abbot Point.

What project are you most proud to have been involved with?

[Jumbo] From my PCQ days – going over to the ports and doing shipping. I enjoy doing shipping. NQBP days – My proudest moment was doing the Kup Murris. I used to love doing work at Hay Point and Mourilyan and enjoy Dalrymple. I enjoy assisting other port supervisors when they needed help.

[Kel] The project that I am most proud of is being an inspector on site, for the demolition of the outer section of the public wharf and on berth three and four coal loader.

What do you love most about your job?

[Jumbo] I love being in the outdoors, I love giving people a hand if they genuinely need it. And working with Kelvin.

[Kel] What I like about my work, is that we could be doing something different every day.

Thank you Jumbo and Kel for your commitment and dedication to the job for an incredible 35 years.