Forty years is a long career for anyone, but for a marine pilot it is almost unheard of – which makes Mike Boss-Walker’s career particularly impressive. 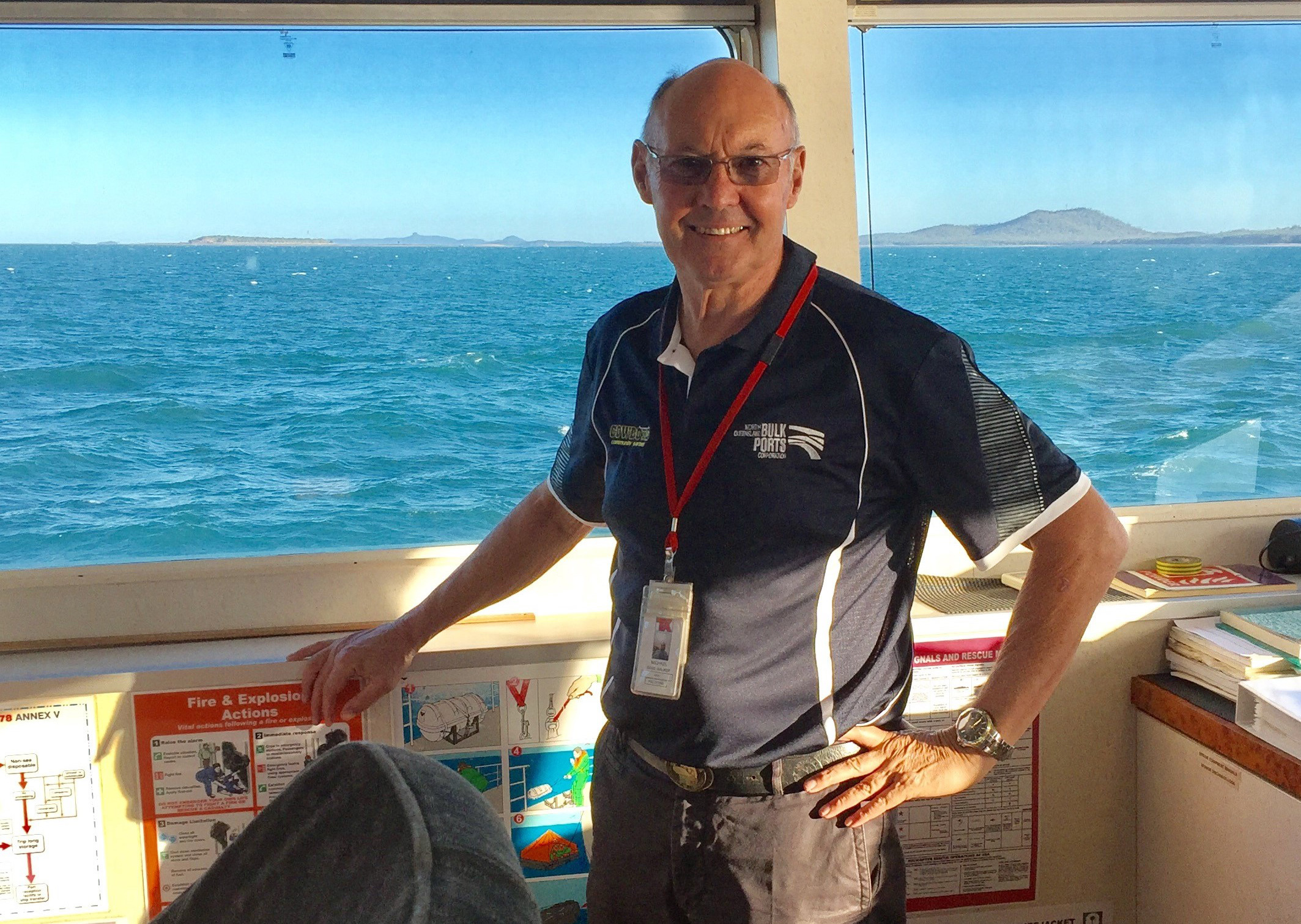 The Senior Marine Pilot at North Queensland Bulk Ports Corporation (NQBP), who retires this month, has had a varied and extensive career as a Master Mariner.

Captain Boss-Walker said it was the desire to be on the water and not behind a desk that first attracted him to life at sea.

“I started my working life as a law clerk – and I hated it,” Capt Boss-Walker said.

“I used to look out the window at the ships coming into Hobart and thought ‘That’s where I should be’.

“So, I went down on board a ship to find out about that and I found myself a cadetship and that was when I went to sea.”

That was 1965 and the start of his 12 years with both the Australian and British Merchant Navy, which took him around the world eight times.

The decision to come ashore was to take a role as assistant harbour master in Burnie, Tasmania.

“I didn’t think I would ever stay there but I ended up there 25 years – Deputy Harbour Master, Harbour Master, Deputy CEO – in all that time I was piloting ships,” Capt Boss-Walker said.

When he moved to Hobart as Harbour Master/Pilot it was a restructure of Tasmanian ports that caused a change of scenery, taking him north to the Great Barrier Reef as a Reef Pilot through Hydrographers Passage.

Four years later he returned to harbour pilotage, at the Port of Hay Point.

At the time pilotage at the port was under the control of Maritime Safety Queensland but was transferred to NQBP for the ports of Hay Point and Mackay in 2013.

“He is an amazing resource of information in regards to ship handling, managing bridge teams and his professional ethos in the marine pilot profession.

Capt Bathe said Capt Boss-Walker had piloted in excess of 7000 ships throughout his 40-year career.

“He (Mike) has been very generous in passing on his extensive knowledge and skills,” Capt Bathe said.

Capt Boss-Walker has seen more changes than he ever considered possible, with technological advances making a big difference to the way marine pilots operate. But he said the biggest satisfaction came from beyond the technology.

“It’s extremely satisfying to take a 300-metre long ship and put it alongside the berth and not dent or bend anything, to do it safely, and not damage the environment – it’s very satisfying,” Capt Boss-Walker said.

“You drive home and you’re on a high. You never stop learning and every job is different.”

NQBP Chief Executive Officer Steve Lewis thanked Capt Boss-Walker for his years of service both in other parts of Australia and while at NQBP.

“It is impressive for anyone to work in their chosen career for 40 years, but in this particular profession it is nearly unheard of,” Mr Lewis said.

“On behalf of NQBP I would like to wish Mike all the best in his retirement – he will most certainly be missed.”

It’s been an enjoyable and rewarding six years at Hay Point for Capt Boss-Walker, and he said it was a great place to finish his career.

He’ll miss the water and his colleagues, but the nearing of his 70th birthday made him realise it was time to set sail for retirement.

“I don’t know of anyone who has been a pilot for this long,” Capt Boss-Walker said.

“Most start out in their mid-30s and then retire in their 60s – I was in the right place at the right time to get the first job and such a long career.

“I’ve met lots of good people. I describe pilots as ordinary people doing an extraordinary job – and don’t get the adjectives mixed up!