Recent upgrades at the Port of Mackay is already making a difference for the local manufacturing, mining and transport sectors.

Bound for BMA’s Saraji mine in the Bowen Basin, the delivery of six haul truck trays this week signals another win for North Queensland Bulk Ports Corporation (NQBP). 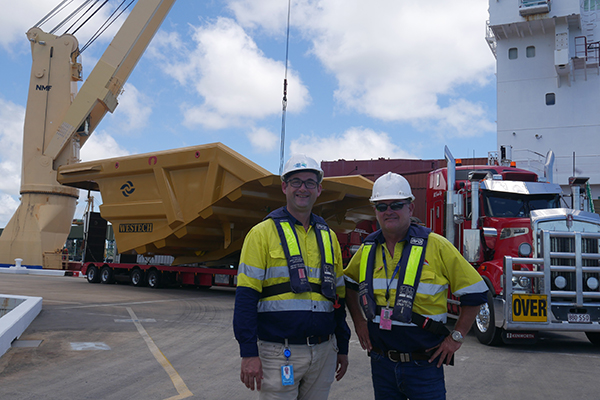 “NQBP worked with National Heavy Haulage for a number of months to facilitate this trade through the Port of Mackay to minimise transport costs for the project,” Mr Mallan said.

“It demonstrates the Port of Mackay as a primary link to the rest of the world as a break bulk port.

“With the improvements in the mining sector, NQBP is expecting to see more of this type of cargo arriving through the Port of Mackay.”

Mr Mallan said the construction and commissioning of the quarantine wash facility at Mackay de-risked the delivery into the country as a first port of call.

“NQBP is investing in improving the capabilities of the port to support these types of trade, including a new roll-on roll-off facility.”

“NQBP at the Port of Mackay has been flexible and nimble in working with National Heavy Haulage to facilitate this cargo,” Mr Scott said.

“Access to good quality hard stand areas allowed unloading the ship and moving the cargo to be much more efficient.

“We look forward to future shipments and continued increase in break bulk through the port and out to the mining community.”

Austin Engineering sales and support manager Scott Harding said for the first time in 20 years of manufacturing and designing dump truck bodies in Mackay they had to ship some in to meet demand.

The company had the BMA contract to deliver eight truck trays but it only had the capacity to build two in its Mackay workshop within the eight-week time schedule.

“Business has definitely picked up and they needed them quickly,” he said.

“These bodies will be going on to some 793C trucks at site and these particular bodies will give them far greater capacity to move coal.”

The haul truck trays will be transported west this weekend.