NQBP’s long-standing relationships with indigenous representatives have helped guide its approach to cultural heritage, port management and development for more than 10 years. 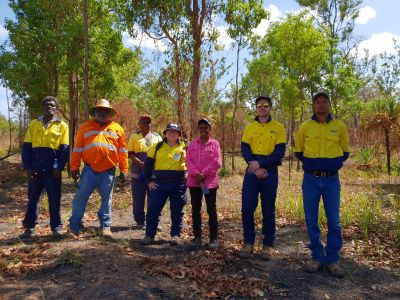 In 2018, we’ve worked closely with traditional owners in each of our locations to kick off some exciting new projects and achieve important milestones.

Land management and mentoring with the Juru People

In September, we committed to a two-year contract with Juru Enterprises Limited (JEL) for land management services at Abbot Point. The Juru People are the Native Title holders of the land at the Port of Abbot Point.

NQBP signed an Indigenous Land Use Agreement (ILUA) with the Juru in 2012, although we first began working with them in 2005.

Since signing the ILUA, the Juru have monitored and consulted prior to any development happening at the port. This year we were pleased to strengthen our partnership by engaging JEL for the land management contract, which includes weed management across the area.

The team is led by 33-year-old Jessica Vakameilalo, who went to school in nearby Bowen State High School and has grown up with a strong understanding of the importance of the land around the port to her people.

NQBP has also agreed to bring forward funding allocated through the ILUA to facilitate business growth for JEL, which aims to expand its land management services and client base throughout the Bowen region.

“We’re able to assist NQBP with our deep knowledge on country and I’m personally very excited about the opportunities NQBP can potentially offer our young people in mentoring, career progression and development,” he said.

NQBP’s first mentorship will take place when Jessica joins our environment team in the Mackay office for a week. NQBP principal development adviser Julie Keane said she was looking forward to welcoming more young indigenous people in various capacities around our ports in the future.

“At the heart of our partnership with the Juru is a commitment to sharing and valuing each other’s knowledge and expertise,” she said.

“Having Jessica in our office is also a terrific way for her to pass on some of her insights to our employees, who might not otherwise get a chance to learn from her experience on country.”

Cultural heritage with the Yuwibara People

After signing a Cultural Heritage Management Plan with the Yuwibara People for the ports of Mackay and Hay Point, NQBP conducted a reconnaissance survey with traditional owners in July.

Yuwibara representatives joined NQBP planning and environment team members, as well as a qualified archeologist, for a three-day field survey that included a helicopter flight over Dudgeon Point and the Mount Hector conservation area and a walk through the area just north of the Port of Mackay.

“It was really interesting to observe the land around the port through the eyes of a traditional owner and notice significant elements I wouldn’t normally see,” she said.

The traditional owners identified several different types of bush tucker, for example, in the land around the port.

“We ate some green ants, a few berries and wild grapes,” Kirsty said. “And they pointed out plants that definitely shouldn’t be eaten, too.”

Julie noted the diversity of ecosystems.

“You really noticed the difference between the top of the dunes and the swales.

“Atop the dunes, it is hot and dry. But as soon as you walk down into the swales they’re beautiful and cool. There’s lichens, moss and really lush vegetation. It’s a whole different habitat,” she said.

Our next step working with the Yuwibara People will be to produce a cultural heritage induction for the port areas, Julie said.

Touring the Cape with the Alngith People

In September, the NQBP field team also travelled to Weipa to complete a cultural heritage assessment on country with the Alngith People.

NQBP signed a Cultural Heritage Management Plan with the Alngith, Wik and Wik Way people in 2004, relating to the south channel area at the Port of Weipa.

It’s important to note that cultural heritage can apply to both land and water, both of which may contain elements of cultural significance or story sites for traditional owners.