The Port of Mackay is cementing its reputation as a multi-cargo gateway to Central Queensland welcoming its fifth roll-on roll-off (RORO) vessel today. 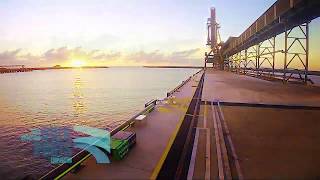 The Port of Mackay welcomes the Höegh Trapper

The Höegh America is a smaller car carrier (6,500 capacity) compared to the Höegh Trapper (8,500 capacity) which gained a lot of public interest when it visited Mackay in March. However, the America is still impressive in its own right standing at almost 200 metres long.

“Large mining, agricultural or other equipment is being regularly shipped directly to the region.”

Norwegian-based shipping company, Höegh Autoliners, is one of the world’s leading RORO operators.

Höegh’s Australian representative Brendan Wallis said Mackay has been a great addition to its service, and a great way to service North Queensland with oversized breakbulk and machinery.

“We now have vessels sailing to Mackay every month, which gives our customers confidence to plan and optimise their supply chain for maximum efficiency in the competitive environments that they operate in.”

Höegh has increased its direct shipping service to Australia and New Zealand from the USA and Mexico, providing Mackay and the nearby Bowen Basin with a direct link to North American mining equipment manufacturers.

The Höegh America delivered over-dimensional breakbulk cargo for the mining industry, before departing the Port of Mackay for Japan, where it will begin its East Asia to Europe service.