Port of Mackay has posted its strongest first half of a financial year since 2013, with six break bulk shipments in December and January also signalling a potential pick-up in mining activity in the area. 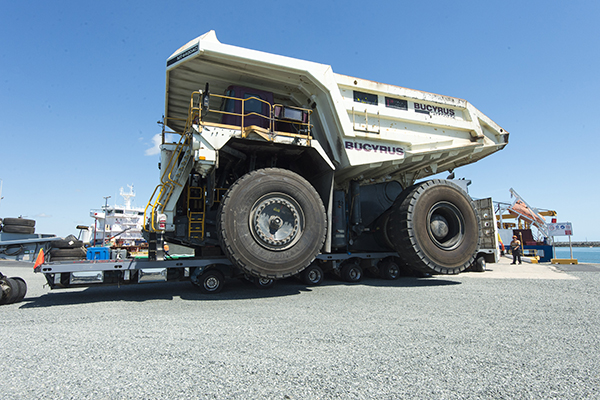 A variety of industry heavyweights including Hastings Deering, Austin Engineering, UGM, FleetCo and PlantCo have brought cargo through the port over the past two months.

“Our regular commodity imports and exports like diesel, sugar, grain and magnetite remain strong, and on top of that we've experienced an increase in heavy machinery coming through. The whole port feels energised and very positive about the year ahead,” he said.

Figures from the Australian Bureau of Statistics (ABS) for the 12 months to June 2017 support this trend, with Queensland's real gross state income showing the highest increase of any state over the period at 7.5%†. This reflected higher volumes produced and prices received for mining commodities, the ABS said.

Queensland Government Statistician's Office numbers also show the state's overseas exports had their second biggest year of growth in 2016-17 since its records begin in 1988‡.

Five of the six breakbulk shipments have been imports to support this growth.

Hastings Deering noted trucks that had originally been loaded out of Mackay in April 2015 were now being sent back to support local operations in the Bowen Basin.

“We are seeing an uptick in demand for our products and services in and around the Mackay and Bowen Basin area. This generally stems from an increase in productivity and utilisation of equipment, driven largely by demand for our resources,” a representative said.

“We certainly witnessed an increase in activity throughout 2017 when compared to the previous year. We are hopeful that the trend will continue in 2018,” said Kira Seeley, global account manager.

UGM imported a high wall mining system for Peabody's Millenium Mine a couple of weeks ago, assisted by Conceptum Logistics.

“This delivery comes on the back of a large project completed during quarter two and three last year,” said Darren Bennet, general manager at Conceptum.

“There is a definite pick up in the mining sector and the Port of Mackay is perfectly positioned to assist future mining projects throughout north Queensland."

Both Port of Mackay and Port of Hay Point continue to undertake a variety of projects to expand capacity and improve efficiency in operations. New lead lights completed at Port of Mackay shortly before Christmas are helping marine pilots maneouvre large ships into the port, while at Hay Point work has begun to upload the marine offloading facility.